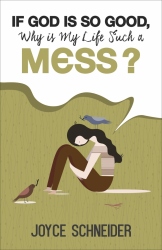 For God so loved the world that he gave his one and only Son, that whoever believes in him shall not perish but have eternal life.  —John 3:16

“Jesus Loves Me” was one of the first songs I learned in Sunday school as a child. But the words were never real to me. They were in my head, but not in my heart. Truthfully, I didn’t believe I could ever be good enough for Jesus to really love me, so I spent the next forty years of my life running away from him.

When the boys were younger, flag football was the deal at our house. The boys played, and Bobby coached. We spent a couple nights a week at practice and then played Saturday games. Both the boys played the position of running back. They both scored touchdowns on a regu- lar basis.

One Saturday, I was in Orlando at a conference, and I missed their games. I thought about them at the time they were playing and was praying for them that they’d have a good day.

But when I called that day to check on them, Bobby told me that they not only hadn’t won their games, but neither boy had scored a touchdown.

Chase came on the phone, and I asked him how he’d done, and he said, “Not so good.” I heard Bobby saying in the background, “Say it was because Mommy wasn’t here cheering you on.”

Why do men do that to us? Not fair, not fair at all.

So, of course Chase repeated that, and I said to him,

“Honey, I was cheering you on in my heart.”

And his reply was so sweet. “But I couldn’t hear you, Mommy!”

That’s how my life was before I let Jesus into my heart.

He was always cheering me on, but I couldn’t hear him!

Excerpt from If God Is So Good, Why Is My Life Such A Mess?  by Joyce Schneider