If we confess our sins, he is faithful and just and will forgive us our sins and purify us from all unrighteousness.
I John 1:9

I was listening to a song on the radio the other day and a line in the song caught my attention.  I know … all the lines mean something.  But sometimes words just pop out at me, either in songs or when I’m reading God’s Word.  It’s called revealed truth; it’s when God shows you something.  Something just for you.  And I love when that happens.

Nine years ago, I was surrounded by the wall of shame and guilt that I had built around my heart.  And then one night, I let the walls come crashing down, because I couldn’t stand the façade of fakeness another day.  I let the light of Jesus, shine into in my heart; the light met the dark and the light won!  And everything changed!

I don’t share my story because I’m proud of my past.  My past is ugly.  But Jesus took the ugliness away, and through my broken life His light shines through.  And He uses that light is to draw others to Him, to His healing love.

I want to encourage you to listen to this song:

Let your walls down, please.  Let Jesus heal your heart.  Let His light meet your dark.

Jesus, this song fills my heart with joy.  Your love blows me away.  There is true freedom in you.  I can remember the pain, I can remember being broken, but I can’t feel it any longer. And it’s not because I numbed it away.  It’s because you healed my heart, you healed my hurt, and you filled my life with you.  Thank you bringing your light into my dark.

I love you Jesus!
In your name I pray,
Amen

God’s Blessings Upon You!

The Choices You Make Today …
Will Affect Your Tomorrow!
http://www.alifedecision.org

Offenses will come … what you do with them will determine your future.

Jesus offended people, but only for the Glory of The Father.  He never offended anyone to make himself look better or for his own glory.

We must forgive, our salvation is based on Jesus’ forgiveness of our sins.  If we don’t forgive others, God won’t forgive us.  (I didn’t make this up. Read Matthew 18)

Revenge is a trap that will destroy you.  Let God be your avenger … forgive and forget.  Forgiveness does not mean you agree with what the other person did, it simply means you are releasing them to God.

Sometimes an offense doesn’t disappear overnight.  If we have been truly wounded, it takes time for that hurt to heal.  A tiny splinter in the finger heals much quicker than the incision from open heart surgery.  Some offenses have wounded our heart … allow the wound to heal.  Give yourself time.  Try to allow a distance between you and them, so that the wound will not be reopened and during this time, pray blessings over those who have hurt you and mean it!

Reconciliation isn’t always the case, but, If at all possible, as much as depends on you, live peaceably with all men. ( Romans 12:18)

We want to be peacemakers … not peacekeepers.  A peacekeeper avoids confrontation at all cost to maintain peace, even at the risk of compromising truth.   A peace maker will go in love and confront, bringing truth so that the resulting reconciliation will endure.  He will not maintain an artificial, superficial relationship.  He desires openness, truth and love.  He refuses to hid offense with a political smile, He makes peace with a  bold love that cannot fail.

Remember, on our own, we can’t do this … but with the spirit of God inside of us, his love cruising through us, we have the power to be offense free.  Love never fails, never fades, and never comes to an end.  It seeks not its own.  It is not easily offended.  (I Corinthians 13:5)

Now … the question is, what are you going to do with the information?  Spend some time with God.  Search your heart for any offense.  Forgive, release and live in the freedom that Jesus died for you to attain!

On Thursday, July 14, 2011, Tree of Life Church Partnered with Harry Chapin to give away thousands of pounds of food to 229  families.  This is such a hands on way of sharing the love of Jesus with our community!  Thank you to all who helped! 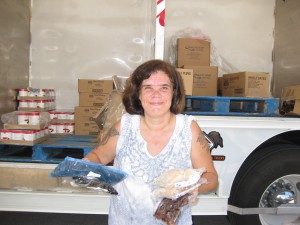 The Tree of Life had a float in the annual 4th of July Parade in downtown Naples on July 4th.  About 20 people helped put the float together.  A special thank you to John and Melissa Parsons for the use of their truck and trailer and for organizing this event.  There were about 50 members of The Tree either walking in the parade or riding on the float.  One thousand ice pops were handed out to parade watchers.  We had a picnic lunch at the church afterwards.  Thank you to Jerry Stevens and Ken Jackson for cooking the burgers and dogs.  A great time was had by all! 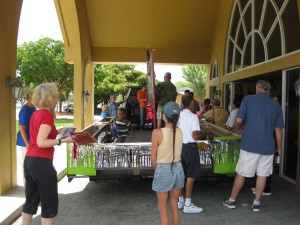 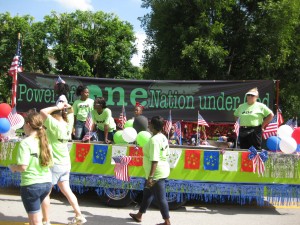 Carson and Chase are at an interesting place in their relationship. They don’t like each other very much right now. And they continually blame the other for anything and everything that goes on between them. If Carson hits Chase it is because Chase looked at him wrong. If Chase gets angry at Carson, it’s because Carson called him a name. Neither one of the boys will take responsibility for their actions and stop annoying the other. They enjoy blaming each other, in fact, it’s really become a game with them and most of the time I’m not even sure they are more into the fighting or just seeing who can blame the other for the most offenses.

The other night, I pulled each aside privately and told them they had to take responsibility for their actions. I was tired of listening to the bickering and that it was time to stop. And then I gave them an added incentive. They will lose their electronic privileges if their wrongful behavior continues.

It’s been much more peaceful here since our conversation. Maybe something finally clicked in. Maybe they are starting to understand that they are responsible for their own actions, their own responses, that just because someone else did something wrong, doesn’t give them the right to do wrong as well.

I know this game isn’t anything new. In the Book of Genesis, after Adam ate the fruit that God warned him not to eat, he blamed the woman that God had given him. When Eve was confronted, she blamed the serpent for deceiving her.

In Exodus, Aaron blamed the people for his decision to make a golden calf for them to worship.

In I Samuel, Saul blamed the people for his disobedience to God in the order to destroy the Amalekites.

It is always easier to blame another, yet, when we stand up and take personal responsibility for our actions, God can work miracles in our lives. King David had an affair with another man’s wife, then had the man killed in battle, so he could marry her and be the father of the baby she carried. When Nathan the prophet confronted David, he didn’t blame the woman for his sin, but rather took personal responsibility, fell on his face before God and repented of his actions. When the baby died, David didn’t blame God, but rather wiped his tears and moved forward with his life. David was the most famous King of Israel, God called him a ‘man after my own heart.’ Not because he was sinless, but because he chose to be a victor, not a victim.

Father, thank you for this lesson on responsibility. I know I cannot change another, I know I alone am responsible for my actions. Help me Father to admit my mistakes, to use them to move forward, but to also learn from them, so that I do not repeat. Keep my heart soft Lord Jesus, so that it is always focused on you.

I love you Jesus,
In your name I pray.
Amen

God’s Blessings Upon You.

The Choices You Make Today …
Will Affect Your Tomorrow!
http://www.alifedecision.org